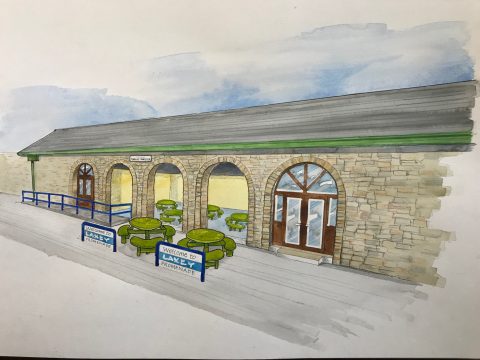 The Commissioners have continued to work on the detail of their plans for improvements and refurbishments to the Public Shelter on Laxey Promenade in recent months As a matter of courtesy, the Board have recently met with the tenant and Manager of the kiosk to brief them on the plans. Consequently, the Board are now in a position to make these details available to the public (please see the first image which illustrates these plans).

The Commissioners’ auditors had requested that the Commissioners take steps to clarify the status of the Public Shelter. This was partly to clarify insurance liability but was also to make clear that the shelter was a space that could be entered freely into and enjoyed by all at any time.
The tenant of the kiosk has been offered the option of a licence to make use of the area immediately in front of the kiosk entrance (indicated by the green line in the second image). The land they wish to license to the tenant has a total area of 21 square metres.
It is worth noting that there has never been any lease issued to any party to use the Public Shelter space. There was, however, an informal statement made by Laxey Commissioners in 2008 in response to a question from the tenant. This stated that customers of the kiosk could consume refreshments purchased from the kiosk in the Public Shelter. The Commissioners continue to have no objection to customers of the kiosk making full use of the public facility. This is an aspect that the Board welcomes and encourages. 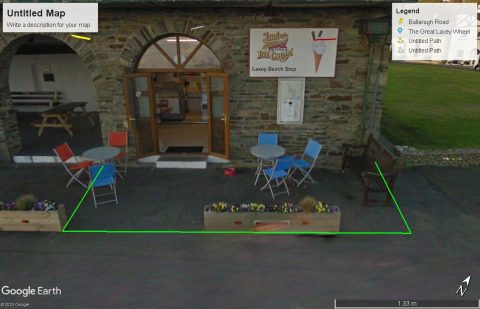 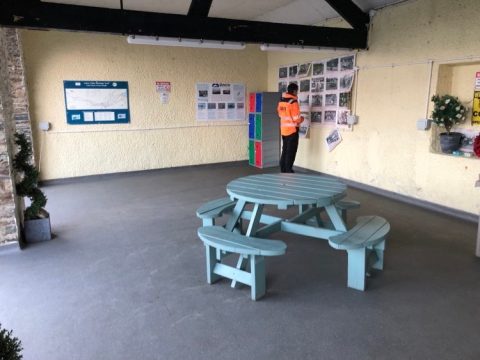 It should also be noted that it is the responsibility of the Board to proceed in a way that assures the public that their decisions have not been influenced by any bias, prejudice, or conflict of interest that may arise.

Summary of works being undertaken
1. The Commissioners will be installing furniture throughout the Public Shelter, and on the three metre wide apron in front of the building. The tables and seating will be installed, and available at all times during the year; including when the kiosk is closed. The tables will include spaces to provide wheelchair access. They will be painted in a colour that will be determined in due course. These proposals are illustrated in the image.
2. As can be seen a concrete ramp will be installed to make access possible for everybody. The railings will be coloured to assist those with sight impairments. The railings to be installed are DDA compliant. The design of the ramp shown here is indicative and another configuration may be installed to provide the necessary access to the public facility.
3. Six small stacking lockers will be installed as shown in the third image. These will take up minimal floor space (65cm wide x 46cm deep).
4. As the illustration shows, barriers will be installed to mark out the frontage of the public shelter and demarcate the tabled area immediately behind. These will be in the same style and finish as the ramp railings.
5. The Public Shelter will be painted throughout as part of the refurbishments and a Wi-Fi access point will be provided. Other improvements will be made including new information signage which will be installed for the benefit of visitors to Laxey and Garff as well as forming an information point which will be used to promote local businesses.
6. The Commissioners’ cleaning contractor has been engaged to regularly clean the Public Shelter. In addition, the tenant may wish to continue cleaning the tables if they feel that this is in the commercial interest of the business – the Commissioners have no objection to this being undertaken.
7. Following on from the success of recent events with Manx Wildlife Trust, a programme of themed events will be scheduled into the Spring and Summer season of 2023. These will use the Public Shelter as a base for the activities. Full details of this programme will be announced in due course.
It is anticipated that the Public Shelter will be partially closed for short periods whilst the accessibility ramp is under construction and while the other planned works take place. The Commissioners will programme all the works to fit in with the kiosk’s winter opening schedule. This will minimise disruption to the business, its customers, and to other members of the Public who wish to access the Public Shelter.