The Mona Lisa restaurant and the adjacent buildings are located in the former Laxey Equitable Co-operative (Lower Co.) premises. The co-operative supplied everything – “from the cradle to the grave”, and had its own slaughterhouse at the rear. 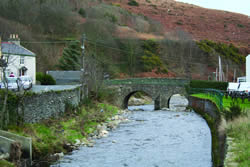 Old Laxey Bridge or “Monks Bridge” is medieval in origin and has 5 arches, although one is now wholly under the road. It led to the “Puncheon” road a packhorse route to Ramsey – a local is said to have carried a puncheon of ale up the hill for a mile and a quarter! The bridge was only widened in the 1820s the route having been replaced by Minorca Hill, the first coach route 20 years earlier! A final widening took place in the 1870s to enable the wagonway from the mine which came along Glen Road to swing around the corner on to the bridge and thence down to the harbourside.

Overlooking all is the hilltop “keeill” site of St. Niglus. This early Christian chapel had a well at its foot reputedly running red with blood after a battle. The nearby chalet site was briefly the home of the first Cunningham’s holiday camp for young men on the Island. 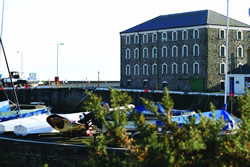 Subsequently it contained an early electricity generating plant before becoming the Erskine Clothing Factory in the 1930s. Captain Rowe was also responsible for having the dock opposite dug out to serve the village. 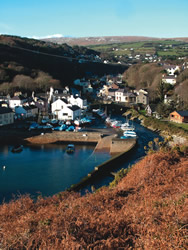 Laxey Promenade was built in 1929 as part of a winter work scheme for former miners. Originally the beach extended back to Back Shore Road or Pig Street. The car parking area was the “jack store” (black jack is another name for zinc ore) and the current cafe was a lead store. In the summer months boats were available for hire. The area was to have been the site of Rowe’s “Brighton of the North” scheme for tourism development.

Until recent years the TT’s popular Honda gathering event still attracted huge crowds and was one of the last events visited by the charismatic Joey Dunlop.

On Shore Road is the Salvation Army Hall, built in 1825 as the first Primitive Methodist Church. Prior to the opening of the mine, Old Laxey was the original village based around fishing and industry, with mills, warehouses and a red
herring house. Its former post office was the birthplace of the later styled “King of Laxey” Robert Williamson who founded the Glen Gardens and a family grocer shop which was later run by his brother James.

Uphill on the right attached to Cronk-na-Quill is reputedly the smallest house on the Island formerly occupied by a shoemaker.

The Shore Hotel built in 1837 was the site of the second Laxey Brewery and is still used as such today.

Following the river upstream alongside the Shore Hotel, the footpath leads to two industrial buildings variously used as flax mills, paper mills, dye works, power station and turbine house for the Manx Electric Railway, a carpet factory and a film studio. The larger of the buildings as a power station had a flue 60ft high reaching the height of New Road above. Coal was brought across a bridge on a branch of the wagonway from Glen Road.