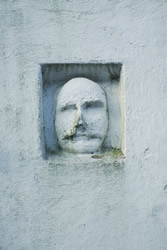 tree trunk swept down the swollen river. The resulting flood affected all but one property in Glen Road and knocked out the power station, on the far bank of the river, which supplied the Manx Electric Tramway.

On the left hand side many of the original cottages were improved by the addition of new frontages – courtesy of the endeavours of Laxey miners who had emigrated to South Africa and other mining countries for work and subsequently returned wealthier or sent money home. Opposite Verndale, the home of local builder John Mylroie, the Victoria Terrace workshop has the masque of his son who died as a student from influenza.

Mylroie’s were responsible for many buildings in the village including Chapel Terrace and former boarding houses Seafield and Ravenscliffe. 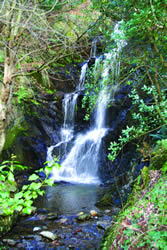 The public footpath on the left leads to the Quarry Falls, a hidden waterfall in the surroundings of the former Hogg’s quarries, supplier of local building stone. At its base a former water wheel case was used for a joiner’s workshop.

The neighbouring Department of Transport’s depot started life as the slaughter house for the “Upper Co” (Cooperative Society). The public recreation ground on both sides of Glen Road is the generous legacy of the Henry Bloom Noble Trust.

Henry Bloom Noble was an entrepreneur who had extensive property interests in Laxey and Lonan. 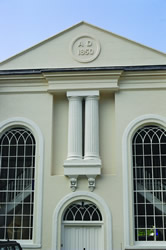 Palladian House was the Wesleyan Methodist Chapel dating from 1843 but enlarged to its present form in 1850. When Primitive and Wesleyan sects of Methodism united, the “Prim” Sunday school on Minorca Hill became the seat of worship and the Wesleyan Sunday school, on the opposite side of Glen Road, became the hall.

Seaward of Palladian House, houses are built on the site of a former builder’s yard and early chemical factory. Behind Chapel Terrace are the remains of one of Laxey’s two Breweries.