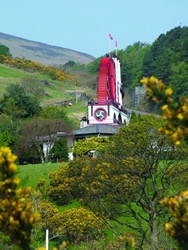 Designed by Manx engineer Robert Casement and used for driving the pump rods to force water out of the mine, the wheel became a tourist attraction in itself.

The Browside Tramway, (which utilised a water-based counterbalancing system), carried visitors up the slope for 1d, and downslope men were charged 1/2d, while ladies went free to the pleasure grounds in the current car park area. 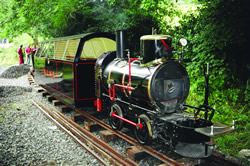 The footpath down to the left below Cronk y Chule, leads above the former changing rooms of the mine to the recently reinstated Great Laxey Mine Railway which boasts the longest tunnel in the Island!

The railway, with two engines the “Ant” and the “Bee”, superseded ponies in the 1870s to bring ore out of the mine via the main adit, passed the “Deads”, to the washing floors (see

) for sorting. Nearby the Copper Adit was the first mining trial dug.