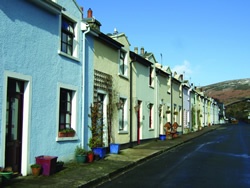 Above the former site of the Miner’s Statue in the entrance to Mines Road, alongside Brown’s Café, is the Snaefell Mountain Railway to the “Seven Kingdoms”, which was opened in 1895. Dumbells Row, the longest line of purpose built (1860) industrial housing under a continuous roof line on the Island, was nicknamed “Ham and Egg Terrace” after most houses started selling teas and meals to visitors in their front rooms.

Only Brown’s established about 1902 in No 2 remains in catering use. Other former tourist attractions in Mines Road included photographic booths and working models of the Laxey Wheel. Laxey Tourist Information Centre and Gift shop operated by Laxey and Lonan Heritage Trust was previously used as the village fire station and the outline of the original opening may be seen on the front gable. 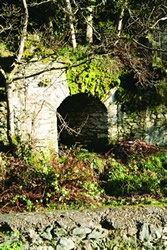 Mines House was used as the mine’s office and in the early 20th century as the Mine Captain’s house. The mountings for a bell used to signal the shift changes are on the garden wall and an original ore truck donated by Mr John Corlett of Ballacowin Farm is in the garden.

The adjoining Mine Yard contained a blacksmith’s yard, a carpenters’ workshop and a gunpowder store which is now the public toilets! On the opposite side of the river were the changing rooms for the miners who then went underground along the cross cut adit to descend to the levels where they were working.

Stables accommodated the ponies who pulled ore trucks from the mine. The buildings washed away in the 1930 flood, a year after the mine officially closed. 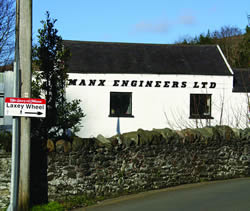 The building housing Manx Engineers was formerly an 18th century water driven corn mill which was operational until the start of World War 2. The smaller building on the roadside, with gear shaft lying in the grounds, was a corn drying kiln.

Opposite, the road and path lead up the line of the former Browside Tramway and back to the start of the walk.

Well done, you’ve reached the end. Look for more things to do in Laxey in the Visitor Guide