On these pages you will find much of interest for visitors to our region. How to get around, where to stay, what to do and learn something about our heritage and history. 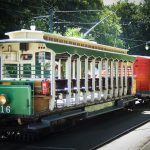 The Manx Electric Railway operates a year-round service along the coast through the whole of Garff from its terminus at Derby Castle, in Douglas to Ramsey. Stop off in Laxey for a detour, also by tram, to the top of Snaefell.

As the Isle of Man is located close to the geographic centre of the British Isles the top of its highest mountain, (621 metres or 2034 feet above sea level), can offer some unrivalled views, weather permitting! It is claimed from the summit one can see seven kingdoms: those of Mann, Scotland, England, Ireland, Wales, Heaven and Neptune. 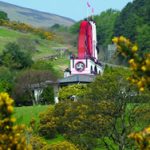 The Great Laxey Wheel or Lady Isabella (as she is also known) is the largest working waterwheel in the world.  A brilliant example of Victorian engineering she was built in 1854 to pump water from the Laxey mines. Today a climb to the top is rewarded with panoramic views across the Laxey Valley. The wheel is a fascinating day out for visitors and is open from spring to Autumn. See Manx National Heritage for details.