The path carries on uphill to the rear of ‘the Dips’ – the BMX track, and following the right hand branch leads to the “Car Sheds” where the first tramway station was built when the track initially reached Laxey in 1894. The station was moved along the line to its present location  as bridges were built. 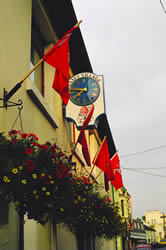 Ahead, a stile to Lower Rencell Hill and steps lead to New Road (completed a few months before “Lady Isabella” in 1854) and to the offices of Garff Commissioners. This building was purchased from Robert Williamson in 1938 and was part of the premises used in the production of “pop” and acetylene.

To the left, the Queens Hotel, which like other pubs in the vicinity evolved with the stage coach route, was scene of a major fire in 1905. Towards the village centre another former “rest and be thankful” – “The Commercial” or “The Coach and Horses” is now the Laxey Health Centre. 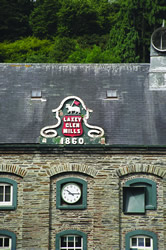 In contrast, the former Temperance Hotel (opposite the Old Police Station) is now a private house. “Moore’s Bridge” is one of the highest viaducts in the Island built by John James Moore of Baljean. Running proudly adjacent to it is a fine Railway Bridge built in only 3 months in 1898 by Mark Carine.

Laxey Glen Flour Mills, designed by Robert Casement is the only surviving operational flour mill on the Island. Captain Richard Rowe, a Cornishman, opened the mill in 1861 and his family crest adorns the front of the building; the same symbol is used to indicate the purity of tin exported from Cornwall. 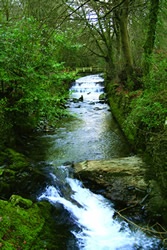 The Glen Gardens, originally opened as “Victoria Park” in the 1860s by Robert Williamson, accommodated a host of attractions and a pavilion. The glen, now owned by the Department of Agriculture, Fisheries and Forestry, is made freely available for public use.

The nearby Glen House was Williamson’s own home and a hotel designed by one of the Island’s finest architects W. J. Rennison. On the right hand side of New Road, is “The Working Men’s Institute”, erected in 1876 by the miners for their educational benefit. It has seen many notable village events such as the first Commissioners elections in 1895, the first film show and the inquest into the tragic Snaefell Mine disaster – the Island’s worst mining disaster when 20 men lost their lives.

Next door Montague House, with a mason’s symbol above, was built for William Stevenson in 1868. This was the first building occupied by the Laxey Industrial Co-operative Society (the Upper Co.) who later built the nearby White House buildings. In the 1960s Montague House was refronted and now houses the village chemist. 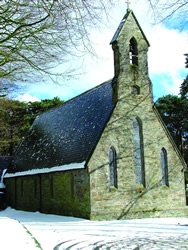 Turn right into the station area. In the former gardens of the Mine Captain’s house (now the Mines Tavern), is Christ Church Laxey. Built as a chapel of ease in 1853/4, the church was consecrated in 1856.

The tramway from Douglas to Ramsey was completed in 1899 and combined in one station area with the extended Snaefell Mountain Railway. Completion necessitated demolition of a third of the Mine Captain’s house which became licensed premises after the large station dining rooms burnt down in 1918.

Opposite its rear entrance onto Captain’s Hill is a closed footpath called “the Captain’s path” which was used as the personal route of the Mine Captain to the Washing Floors.

Beyond the tram sheds is the Laxey and Lonan Heritage Trust’s display of vintage agricultural machinery within the blacksmith’s yard. The building is still used by a blacksmith, albeit not a farrier.