A Requisition Meeting has been called to discuss the “better protection and promotion” of the crosses at Kirk Maughold. The current Cross-House contains a wide range of historically important stone carvings from the 6th to 13th Century, which covers the early Christian period, both Celtic and Norse.

The Cross-House contains an impressive range of  slabs found in Maughold including a carving representing the legend of Sigurd, and Juan the Priest’s Stone which was found in the Corony Valley.

The meeting is set to take place at Kirk Maughold Church Hall on Friday 14th May at 7.30 pm (subject to the lifting of Covid restrictions). 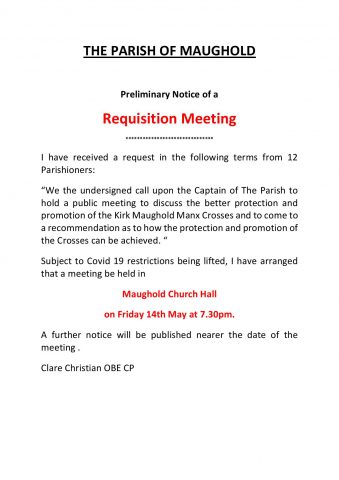 The Church also contains a large number of historically important Celtic crosses from the early Christian period (6th-13th Century) and the ruins of three keills,

suggesting that it was the site of an early Christian monastery and the main pre-Norse religious community on the Isle of Man.

Nowadays, the crosshouse in the churchyard contains almost a third of all pre-Norse cross slabs found on the Island, including the Pillar Cross which is the only remaining parish cross on the island and depicts the oldest stone-carved example of the three legs of Mann symbol on the Island.

Find out more about the crosses and their context at….https://www.worldwidewriter.co.uk/manx-crosses-runes-oghams-early-history-isle-man.html